Three surgeons who shared their extraordinary experiences of working on a Covid ward during the pandemic have been given a first glimpse of the life-sized sculptures their stories helped to inspire.

The artwork, which was created by renowned sculptor Kenny Hunter and commissioned by the Royal College of Surgeons of Edinburgh (RCSEd), was unveiled at a ceremony held within the medical College’s grounds in the Scottish capital today (October 13).

Believed to be the first memorial in Scotland dedicated to NHS staff who worked through Covid-19, it marks the compassion and resilience of NHS staff during this period, depicting four healthcare workers in scrubs as they experience a moment of reflection at the end of a shift on a Covid ward.

Crafted by sculptor and lecturer Kenny Hunter, this sculpted figure group is entitled ‘Your next breath’ and was conceptualised after spending time speaking with three surgeons who had been redeployed to work on Covid wards during the early stages of the pandemic.

During Kenny’s discussions with surgeons and RCSEd council members Anna Paisley, Clare McNaught, and Nirmal Kumar, the sculptor captured the mix of strong emotions healthcare workers were experiencing during this challenging and exhausting period.

The unveiling of the sculpture has been the culmination of over two years of concentrated work and its narrative is based on the testimonies of those who worked on Covid wards,  so I’m extremely thankful to each of those who opened up to me about their experiences. The contribution of healthcare workers throughout the pandemic to our communities cannot be understated.

It has been a real privilege to be involved in such an important memorial which I hope symbolises our collective gratitude toward all NHS healthcare workers and their selfless actions.

The memorial was initially modelled in clay and then cast into resin, at this stage it was previewed by King Charles III in June, before being cast in bronze and installed in the grounds of the Royal College of Surgeons of Edinburgh.

Seeing the sculptures in-situ like this has been incredibly emotional. Kenny has taken the emotions my colleagues and I were experiencing at the time, which were a real mixture of darkness and light, and transformed them into this stunning piece of art. I think the life-sized figures are very impactful. As a viewer, they really make you stop and think. It was a privilege to be involved in this process.

The unveiling of this striking piece of public art represents not only a significant moment in history, but also offers us the opportunity to stop and reflect on all the NHS workers who lost their lives whilst working on the frontline during the pandemic.

We are delighted to see this incredible piece of art come to fruition. I hope that this memorial, which will now be situated permanently within our College grounds, will encourage visitors for years to come to consider how much healthcare workers sacrificed and how vital they were throughout this period.

I would like to extend my thanks to Kenny who has done such a fantastic job in bringing this sculpture to life, and all of my colleagues who served our healthcare system throughout the pandemic, to whom this sculpture is dedicated. 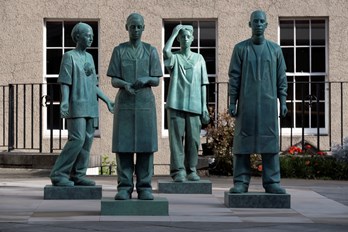 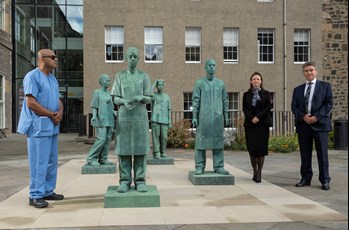