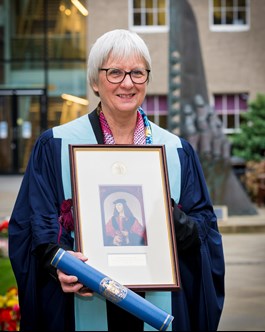 Professor Elizabeth Davenport has been awarded the King James IV Professorship by the College. On 3 October 2019 Professor Davenport delivered the King James IV Lecture entitled The Pursuance of Excellence and the Advancement of Dental Education as part of the award, where she discussed paediatric dentistry and disease together with current concepts of education review.

A supporting lecture was provided by Professor Katharine Boursicot, Associate Dean for Assessment at the Duke-National University of Singapore, entitled Contemporary Framework of Validity: A New Approach to Quality Assurance of Examinations, based on establishing whether assessment practice was fit for purpose.

The King James IV Professorship is awarded annually in open competition to practitioners of surgery or dental surgery who have made a significant contribution to the clinical and/or scientific basis of surgery. Her Majesty Queen Elizabeth II gave permission for the College to use the title King James IV Professorship as King James IV of Scotland, who confirmed this College's Seal of Cause on 13 October 1506, had an interest in all matters scientific, including medicine and surgery and was proud of his skill as a dental surgeon, adopting the somewhat unusual practise of paying patients on whom he operated.