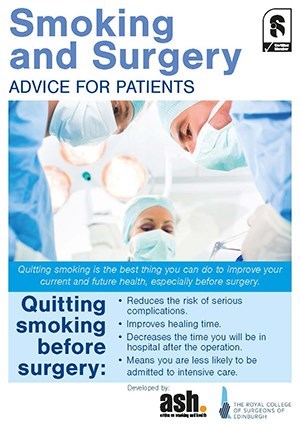 The RCSEd has partnered with the anti-smoking charity ASH (Action on Smoking and Health) to support surgeons in encouraging patients to improve their survival chances by quitting smoking ahead of surgery.

The RCSEd has also written to Secretary of State Jeremy Hunt to highlight this work and ask for his support in ensuring that all patients can access specialist smoking cessation support ahead of surgery.

Fewer postoperative complications, shorter hospital stays and better long-term outcomes are some of the evidence-based benefits the College’s members are being asked to highlight to patients.

The campaign urges all surgeons to view patient consultations as ‘teachable moments’, during which patients may be more receptive to intervention and more motivated to quit. To help facilitate this, a short information leaflet is being circulated to the College's membership.

To highlight this, members of the College’s Regional Surgical Adviser Network explained how they incorporate discussion about smoking cessation into patient consultations.

As part of the discussion of risks associated with a procedure, surgeons should outline the reduction in risk associated with smoking cessation, with the recommendation to stop at least two months before the operation.

During this period, surgeons should work with perioperative medicine teams to increase fitness for surgery and, in this case, encourage patients who smoke to stop. In 2014, the College launched a similar campaign to highlight the benefits of physical activity in preparation for surgery.

One 2011 study found that smokers were 38% more likely to die after surgery than non-smokers. Following their surgery, smokers have a higher risk of lung and heart complications, infection and emergency readmission.

The campaign follows a report entitled ‘Smoking cessation: Policy and practice in NHS hospitals’ from the British Thoracic Society, which found that 72% of smokers in hospital were not asked if they wanted help to quit, while more than a quarter (27%) of hospital patients were not asked about their smoking status.

Mr Pala Rajesh, Consultant Cardiothoracic Surgeon at Heartlands Hospital, Birmingham, and Council Member of RCSEd, said: “Patients who are admitted to cardiothoracic departments for surgical procedures are routinely questioned about their smoking status. Patients who continue to smoke are counselled and seen by respiratory physiotherapists, introduced to an exercise programme and advised on smoking cessation prior to being offered their surgical procedure. They are informed of the risks and complications of continuing to smoke. Most patients comply with the pre-operative measures and in the immediate post-operative phase of their fast-track management.”

Deborah Arnott, Chief Executive of ASH, said: “It is very encouraging to be working with the RCSEd to support its members in doing more to help sick smokers quit. A smoker’s admission to hospital provides an ideal opportunity to help them quit and stopping smoking should be seen as an essential part of a patient’s treatment. It is essential that clinicians are able to refer smokers to specialist smoking cessation services to give them the best possible chance of quitting.”

Michael Lavelle-Jones, President of the RCSEd, said: “We are delighted to have joined forces with ASH to highlight the significant benefits of reduction or cessation of smoking in the months before surgery. It is important for all consultants to take a few minutes to explain to patients who smoke the risks of continuing to do so before an operation, and to refer them for ongoing support and encouragement through a formal cessation programme.”

In April 2016, the College contributed to a joint briefing providing health professionals and commissioners with clear advice and examples of good practice in relation to smoking and surgery. The current campaign has the backing of a number of other medical organisations, including the Faculty of Public Health and the Royal Colleges of Physicians, Anaesthetists and Surgeons.