RCSEd Saddened by the Passing of Patron, HRH Prince Philip

The Royal College of Surgeons of Edinburgh is saddened to hear of the passing of its patron, HRH Prince Philip. 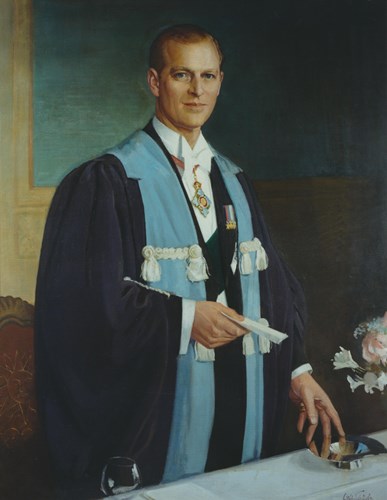 Prince Philip extended his patronage to the College, accepting an Honorary Fellowship in 1955, and

visited the College on several occasions including in 2006 to open the Quincentenary Building, and in 2015 to open the newly-renovated Surgeons’ Hall Museums and the Prince Philip Building.

On receiving his Fellowship from Professor Walter Mercer, then College President, at the 450th College anniversary celebrations in June 1955, Prince Philip commented: “In these days when everything is either raised or reduced to a science, which really means that the human element is removed as much as possible, it is refreshing to find the word 'craft' applied to something so august as surgery.

“But it is certainly the right word, for the surgeon is the craftsman who draws together the laboratory work of the chemist and the physicist, the nutritional expert and the bacteriologist, the biochemist and the psychologist, and, through the skill of his hands, is the person ultimately responsible for the multiplying of human enjoyments and the mitigation of human suffering.

“I only hope that those people who, quite rightly, believe that surgery is more than a craft will forgive me, but I look at it, still, from the point of view of the patient. If anyone is going to tinker about with my insides I would rather he were an accomplished craftsman than an experimental scientist.”

Professor Michael Griffin OBE, President of the Royal College of Surgeons of Edinburgh, said: “HRH Prince Philip played a very significant part in the College’s history during his 66 years as patron, which we recognised in 2015 by constructing the Prince Philip Building.

“His engagement with Fellows and officers of the Royal College of Surgeons of Edinburgh at the opening of the building was quite extraordinary. His portrait has hung alongside past College Presidents with respect to his status as patron and Honorary Fellow of the College.”