An off-shore oil rig explosion; eventually dramatized in the big screen by Hollywood actors; and a jumbo jet crash would appear unlikely sources of study for minimising errors in an operating theatre – yet Britain’s oldest surgical Royal College has recently awarded one of their highest honours to such a body of work. 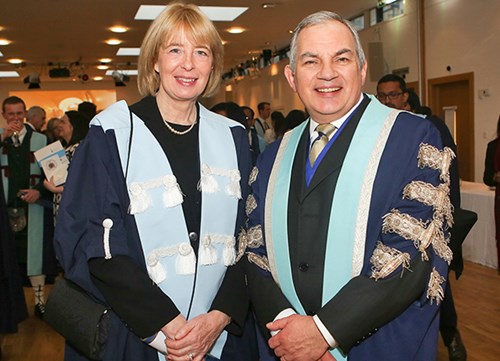 Psychological advisor to NASA, the nuclear industry and the Cabinet Office Rhona Flin has been granted a rare award for a non-medically qualified professional by the Royal College of Surgeons of Edinburgh. The Fellowship Ad Hominem was bestowed for her insightful studies into human behaviour in high-pressure situations – translating analyses from events such the oil rig Deepwater Horizon explosion; one of the largest environmental disasters in history; into unique behavioural markers now implemented in the world of surgery.

Through painstakingly detailed and published studies into human factors such as communication, teamwork and leadership, Rhona revealed a wealth of non-technical aspects which are now incorporated into safety ‘airline pilot-style’ rating systems used by surgeons in the operating theatre as well as by anaesthetists, scrub nurses and even trialled in ward rounds. The resulting programmes, such as the RCSEd’s ‘NOTSS’ or ‘Non-Technical Skills for Surgeons’ are now used widely in the UK, the US, Australia and Japan.

Rhona’s invaluable research identified the importance of sharing not just clinical information but also personal ‘gut feelings’ and possible predictions during case handovers (when the responsibility and care of a patient passes from one team to another). Her work drew parallels between contributing factors which led to the explosion and oil spill of Deepwater Horizon with ‘never events’ occurring in hospital; both being environments requiring complex tasks, multi-cultural as well as multi-disciplined teams, low tolerance for error and a male dominated workforce with strict hierarchy and seniority structures.

Her findings charted how certain abilities having nothing to do with technical expertise – such as monitoring signals, oversights, decision making and leadership weaknesses, stress and fatigue as well as a lack of ‘speaking up’ culture – can lead to disastrous outcomes, whether on an oil rig, a pilot’s cockpit (such as the case of two jumbo jets colliding on a runway in Tenerife) or in a busy hospital. She highlighted issues common to all such as ‘confirmation bias’, where actions are taken based on assumptions that haven’t been challenged and double-checked (“I’m sure the mark was on that side”, “Maybe the initial sponge count was wrong…”) all emerging as part of the causal chain in accident investigations.

According to Rhona Flin, who is also Emeritus Professor at the University of Aberdeen School of Psychology;

“Deepwater Horizon’s catastrophic blowout which resulted in death, injury and one of the largest environmental disasters in history revealed a whole set of failures that had to do with human factors – cognitive and social abilities that complement technical expertise. What is the relevance of this oil industry accident to surgery? I have worked in psychological research in both sectors and there are striking similarities between an operating theatre team and a drilling rig crew – both are hazardous domains requiring similar non-technical skills.”

Rhona’s work in the aviation and military sectors proved instrumental contributions to the development of the ratings system Non-Technical Skills for Surgeons (NOTSS), now also validated for use in ward rounds (the RCSEd’s Ward Round Toolkit, soon to be rolled out UK-wide). Based on her experience in aviation and space flight deck issues and emergency procedures on oil rigs, Flin's work on human behaviour was pivotal to the development of these programmes aimed to reduce error in hospitals. Her studies also analysed differences between behaviours before and after ‘Points of No Return’ – known in aviation and surgery as the go/no go decision stages where the flight, or operation, must continue or be aborted (also known in general relativity as ‘event horizon’, the point at which escape is impossible).

According to Mr Simon Paterson-Brown, consultant upper GI surgeon at Edinburgh Royal Infirmary, Chair of the College’s Education Board and lead on the NOTSS system;

“Would you get on a plane whose pilot only checks their aircraft half of the time? As surgeons we have to get the basics right 100% of the time. Rhona's work has been instrumental in ensuring the increased wellbeing of patients and the creation of safety checkpoints throughout the surgical journey.”

The WHO Surgical Safety Checklist was developed after research showed that nearly half of all in-hospital adverse events were related to surgery , many of which could have been easily prevented. Alongside NOTSS, the implementation of these systems have unequivocally proven to dramatically improve outcomes and decrease the likelihood of adverse events.

Based on a model similar to those used in the aviation industry to test pilots’ cognitive and interpersonal skills, the NOTSS tool is designed to reduce the margins for human error, allowing for structured assessment in:

The Award of this Fellowship to honour Rhona’s work is an historic event; Ad Hominem Fellowships have been awarded to surgeons from other colleges and medical professions in the past, but in this instance the award has been given to someone who is not a medical practitioner.

“It's a great honour as a non-medic to be awarded this Fellowship to the College. I've always worked in applied psychology, which is practical rather than theoretical, and to have been able to work with the UK's leading surgeons to reduce operating theatre risk has been an honour which is only surpassed by being granted this Fellowship."

Rhona started as a psychologist graduating from the University of Aberdeen in 1977 and has led a glittering career, with almost 150 publications, two academic chairs and has been responsible for managing research grants of close to £5M for groups including NATO, , the US Army, Civil Aviation Authority, the Nuclear Industry, US Navy, Cabinet Office and many more.

Professor John Duncan OBE, Vice President of the College, a consultant general and vascular surgeon who put Rhona forward for the award said:

"As surgeons we work in a high-risk sector. That risk can minimal but it is never zero, surgeons are as human as their patients. It is only by understanding how risks occur, that we can work to prevent them,”

"While not a surgeon, Rhona is an expert in the human factors which are associated with risk in high-pressure situations. She has brought her expertise to our workplace, the operating theatre and beyond, helping us understand how we can improve safety for our patients.”