A consultant plastic surgeon from Plymouth has become the first-ever woman to be elected an Office Bearer of the Royal College of Surgeons of Edinburgh, in its 500+ year history. 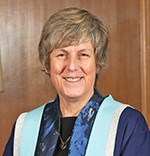 Dr Judy Evans, who has been a College examiner for 18 years and is on numerous College committees, takes up the post of Honorary Secretary, following in the footsteps of Professor Graham Layer who now becomes Vice President.

Judy was educated at Christ's Hospital School, Oxford University and Charing Cross Medical School before being appointed as a lecturer in surgery at the University of Hong Kong. Completing her training in 1990, Judy was also Britain's first ever woman to gain the FRCS (Plast) - specialist qualification in plastic surgery - and is an active member of the British Association of Aesthetic Plastic Surgeons (BAAPS).

Her particular surgical interests include breast surgery and skin cancer as well as working with in many charitable endeavours, including a charity in Thailand helping hill tribe people and more recently, an initiative providing breast screening services to the rural women of Myanmar. The project led her personally to meet and award, with the College President, an Honorary Fellowship to one of the world’s most recognised female democracy campaigners and Nobel Peace prize winner, Aung San Suu Kyi.

“My job is a combination of surgery and art - you have to be a perfectionist to be a plastic surgeon,” said Judy, "This new role now adds an element of being an ambassador too. I'm both proud and honoured to be given this opportunity and hope to be able to serve the College for many years to come".

As well as supporting the President, Judy's role as Honorary Secretary will involve a close working relationship with the Chief Executive, Alison Rooney - between them they will have responsibilities to ensure that the charitable activities are kept within the national frameworks.

Judy also feels passionately about the importance of communication skills in healthcare and recently led a video competition – the first of its kind – for the College, open to medical students and trainee surgeons. She said; “Effective communication is vital for patient safety. Studies have shown that whilst surgeons tend to be generally thorough in providing details about surgical conditions and treatments, they often don’t explore patients’ emotional concerns or express empathy in as much depth as they could.”

The Honorary Secretary is one of only five Office Bearer roles, which also include the President, two Vice-Presidents, and the Honorary Treasurer. The Honorary Secretary is appointed by Council from within the Fellowship of the College. Their term of office is for three years, but can be extended up to a maximum of five. The Council Office-Bearers, together with the Dean of the Faculty of Dental Surgery and the Chief Executive meet on a regular basis to conduct Council-related business.

"I feel honoured to be working alongside someone as passionate and skilled as Judy," said Mr Michael Lavelle-Jones, colorectal surgeon from Dundee and President of the College, "I am sure that she will bring a great deal of new ideas to the council and will also be firmly supportive of our major objectives."