Female surgeon Miss  Farhat Din has been awarded the prestigious Hunter Doig Medal by the Royal College of Surgeons of Edinburgh; Britain’s oldest surgical Royal College; as a recognition of her contributions to excellence in surgery. 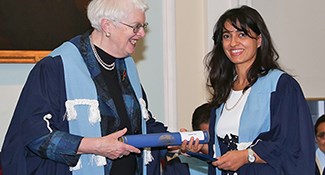 Farhat, a colorectal surgeon from the Western General Hospital in Edinburgh, completed her medical degree at St Andrews and Manchester University prior to returning to Edinburgh to undertake surgical training.

She has for a long time been a passionate researcher and was awarded a Cancer Research UK Clinician Scientist fellowship in 2010. Currently she integrates her clinical practice as a consultant colorectal surgeon with her translational research programme at Edinburgh University investigating the effects of energy and metabolism signalling in colorectal cancer.  She is also an enthusiastic tutor and mentor for undergraduates and surgical trainees.

The Hunter Doig medal is awarded every second year to a female Fellow or Member of the Royal College of Surgeons of Edinburgh who demonstrates career potential and ambition, as well as:

The huge part played by women in the surgical world is becoming increasingly recognised in healthcare, as demonstrated by global social media campaign #ILookLikeASurgeon, Farhat’s award – designed specifically to reward the work of female surgeons – is a true win for positive role models in the sector, providing a platform on which to demonstrate high achievement.

“It is absolutely fantastic to be recognised by the the Royal College of Surgeons of Edinburgh as having made a contribution to surgery, science and training at this early stage in my career. We need surgeons for the future, and it is critical that surgery be an attractive career choice for both men and women. Given that around 55%[i] of medical school entrants are female, yet female consultant surgeons in the UK are at less than 10%, collectively we have to work hard to ensure women know they can actually succeed in surgery, should they wish to pursue such a path. I was fortunate in that I had a key influencer in my father, a retired surgeon, who from an early age encouraged me and told me that I could be whatever I wanted to be, and continues to actively support my surgical and scientific career.”

The first Hunter Doig Medal was awarded by the College in 2007, to recognise excellence within the College's female membership. The Medal is named after two of the College's most notable female surgeons. Caroline May Doig, a paediatric surgeon, was the first woman to be elected to the RCSEd Council in 1984. She served three terms of office and was also the first woman Chairman of a major committee- GMC (Overseas Committee) in 1991. Alice Headwards-Hunter was the first woman to sit and pass the examinations of the Royal College of Surgeons of Edinburgh in 1920.

"The RCSEd is strongly committed to supporting women in surgery and also to recognising excellence in research," said Mr Mike Lavelle-Jones, President of the RCSEd, and a consultant general surgeon; "Farhat has demonstrated a great combination of surgical expertise, support for trainees and importantly contributing to the future of our profession.”

“I was really overwhelmed to receive the Hunter-Doig medal, especially as Miss Doig herself was there to present it. I feel truly privileged and grateful to be a surgeon.”