A consultant colorectal surgeon from North Wales and now based at Ninewells in Dundee, has become the Royal College of Surgeons of Edinburgh's first-ever Welsh President in its 500+ year history. 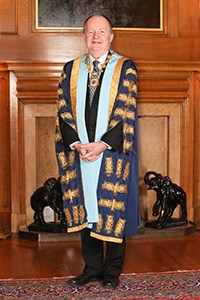 "It is an enormous privilege to be elected as President of the RCSEd and I am especially honoured to be the first Welsh President. My job is to ensure visibility, relevance and influence, in that order. I have inherited a wonderful platform from Ian Ritchie and aim to keep the College going in the same positive direction. I plan to develop the educational portfolio of the organisation to match our wonderful facilities.”

Recently named surgical trainer of the year with the prestigious ‘Silver Scalpel’ award, the highest accolade available to surgical trainers, Mike has had a long-standing involvement with the RCSEd, having served as Convener of Examinations, Honorary Secretary and Vice President for external affairs, with a special responsibility for examinations and the College's international activities.

The post of President is a vital leadership role; as well as leading the College's governing body, which comprises 5 office bearers, 16 members and the Dean of the Faculty of Dental Surgery, it is an important international ambassadorial role for the College, its members and its training programmes.

Outgoing president Mr Ian Ritchie has held the post since 2012, during which the College established its first-ever base of operations in Birmingham (2014) to cater for the 80% of its UK membership based in England and Wales; launched the Faculty of Surgical Trainers in 2013 (the only one of its kind in Britain); and launched the International Surgical Fellowship Programme (2015).

"I inherited the college in good heart and it remains so with increased visibility throughout the UK." said Mr Ritchie, "Our 510 year old College is still extremely vigorous and full of enthusiasm for the future. I know Mike will do a great job and continue to promote the College throughout his term as President”

The President serves a 3-year term of office during which they lead the College in its mission to promote the highest standards of patient care through training and education. Mike intends to combine his new role as College president with his main clinical appointment as a colorectal surgeon at Ninewells Hospital in Dundee.

Today, in its sixth century, the College continues to promote the highest standards in education, assessment and surgical practice and is committed to providing the best services and facilities possible to everyone who chooses to be part of the College.

In recent years, the College has been investing heavily in providing enhanced services to the membership. 2012 saw the launch of the College’s new brand identity, along with improved communications channels to listen, support and engage with its membership.