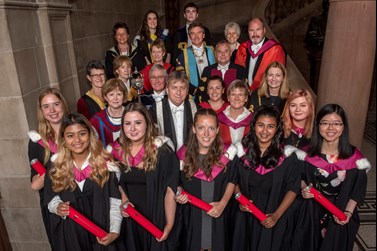 150 years after they were admitted to study medicine at Edinburgh University in 1869 but denied graduation, the Edinburgh Seven have been awarded posthumous honorary MBChB degrees in medicine.

The Edinburgh Seven were a group of women who wanted to study medicine but faced prejudice and abuse, eventually being denied entry to an exam at Surgeons’ Hall by University of Edinburgh students, leading to the Surgeons’ Hall Riot on 18 November 1870. Sophia Jex-Blake, Isabel Thorne, Edith Pechey, Matilda Chaplin, Helen Evans, Mary Anderson and Emily Bovell fought for the right to study and were eventually admitted to the exam by other students.

In March 2018 The Royal College of Surgeons of Edinburgh (RCSEd) unveiled a commemorative plaque in memory of the Edinburgh Seven, part of Historic Environment Scotland’s Commemorative Plaque scheme.

RCSEd created the Hunter Doig Medal in 2007 to recognise excellence within the College's female membership. The Medal is named after two of the College's most prolific female surgeons. Caroline May Doig, a paediatric surgeon, was the first woman to be elected to the RCSEd Council in 1984. She served three terms of office and was also the first woman Chairman of a major committee GMC (Overseas Committee) in 1991. Alice Headwards-Hunter was the first woman to sit and pass the examinations of the Royal College of Surgeons of Edinburgh in 1920.

“The awards ceremony for the Edinburgh Seven was a historic day full of excitement and joy. I was proud to be there celebrating these incredible women and the current day outstanding graduates.”

Today, the huge part played by women in the surgical world is increasingly recognised in healthcare, as demonstrated by the success of global social media campaigns #ILookLikeASurgeon and #WomeninMedicine.