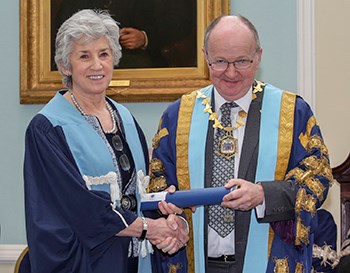 In an award ceremony on Friday 16 March 2018, Professor Hilary Sanfey, Vice Chair for Surgical Education in the Department of Surgery at Southern Illinois University, was awarded a Fellowship ad hominem by the Royal College of Surgeons of Edinburgh.

Professor Sanfey graduated from Trinity College Dublin in 1976. Among many firsts, she was the first woman in Ireland to complete Higher Surgical Training in General Surgery, the first to be appointed as a Consultant General Surgeon in Scotland and the first to be promoted to the rank of tenured professor in the Department of Surgery at the University of Virginia.

In 1992, Professor Sanfey was a member of the team that performed the first liver transplant in Scotland. She continued her practice as a transplant surgeon at the University of Virginia, and also served as the Associate Program Director and Clerkship Co-Director until she left for Southern Illinois University in 2008.

Professor Sanfey is also an ardent spokesperson for women in surgery, and is the recipient of the 2014 Nina Starr Braunwald award for outstanding contributions to women in surgery.