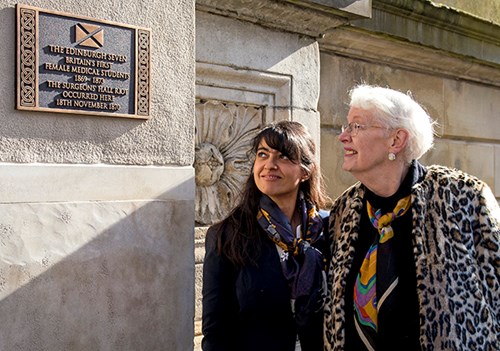 The Royal College of Surgeons of Edinburgh has unveiled a commemorative plaque on International Women’s Day, in memory of the first seven women to be admitted on to a degree programme at any British university.

The plaque, part of the Historic Environment Scotland Commemorative Plaque scheme, commemorates Sophia Jex-Blake, Isabel Thorne, Edith Pechey, Matilda Chaplin, Helen Evans, Mary Anderson and Emily Bovell, known collectively as 'The Edinburgh Seven', who were admitted to study medicine at Edinburgh University in 1869. At the time, their actions were extraordinary enough to attract widespread criticism from all areas of society, even inciting a riot on the streets of Edinburgh.

A defining moment in the campaign of the Edinburgh Seven, a group of women fighting for the right to train and practice as doctors, was The Surgeons' Hall Riot, which took place on 18 November, 1870. It attracted widespread publicity and created a groundswell of support for the women's campaign.

Today, the huge part played by women in the surgical world is increasingly recognised in healthcare, as demonstrated by the success of global social media campaigns #ILookLikeASurgeon and #WomeninMedicine.

The plaque will be officially unveiled at 11:00am on International Women’s Day, 8 March, 2018, by Caroline Doig, a retired paediatric surgeon and the first woman to be elected to the Royal College of Surgeons of Edinburgh Council, in 1984. Ms Doig served three terms of office and was also the first woman Chairman of a major committee – the General Medical Council in 1991. 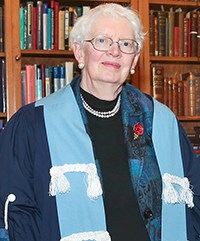 “I was the first woman appointed to the Council of the Royal College of Surgeons of Edinburgh in 1984. Today, the College celebrates the role of women in all its committees and activities, and its growing female membership has reached over 5,000 surgical and dental professionals worldwide. I am delighted there are now so many women pursuing a career in surgery and it is an honour to unveil this commemorative plaque on International Women’s Day, in memory of the first seven women to be admitted on to a degree programme at any British university.” 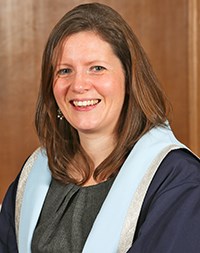 “The surgical workplace will be unrecognisable from the environment in which the Edinburgh Seven trained. Women outnumber men in medical school, and despite still only forming approximately 11% of the surgical consultant workforce, that number is slowly increasing. The ability to work and train less than full time and to be allowed a generous length of maternity leave (which can now be shared with their partner) has helped support women to pursue surgical careers.

“Campaigns to improve workplace culture, such as the College’s #LetsRemoveIt anti-bullying work, whilst not aimed solely at improving conditions for women, are essential if we want to change what has traditionally been a very macho culture in surgery. Creating an open and honest environment in which people do not feel threatened or undermined and can work safely and to the best of their ability is the aim of the campaign. Whilst the surgical workplace has adapted and changed dramatically since these seven women were working, there is still a long way to go to achieve true equality for all. Our campaign hopes to assist with this aim.”