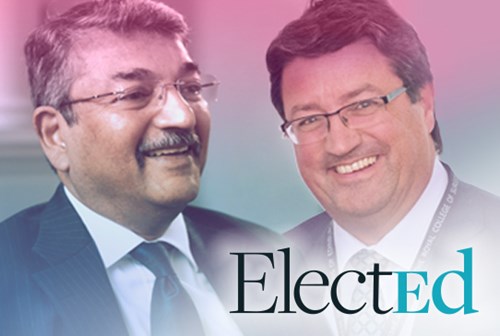 The Royal College of Surgeons of Edinburgh is pleased to announce that following the election process for the appointment of College Vice-Presidents, Professor Rowan Parks and Mr Pala Rajesh have been elected. They will formally take up office at the College’s Annual General Meeting on 9 November 2018.

Professor Rowan Parks is Honorary Consultant Hepatobiliary and Pancreatic Surgeon at the Royal Infirmary of Edinburgh. He is also Professor of Surgical Sciences at the University of Edinburgh. Serving on the Council since 2009, he has served on numerous College committees and short life working groups, as well as organised the Triennial Meeting 2018, President's Meetings 2013-2015, and the Lister Centenary Meeting 2012. He has a significant interest in medical education and training and is currently President of the Association of Surgeons of Great Britain and Ireland (ASGBI) and Deputy Medical Director of NHS Education for Scotland (NES).

Commenting on his appointment as Vice-President-Elect, Professor Parks said:

“I am absolutely delighted and thrilled to be elected as Vice-President of The Royal College of Surgeons of Edinburgh. I consider this an enormous honour and privilege. I am looking forward to working with the new Officer Bearer team and taking forward the College vision and strategy to ensure high professional standards in the delivery of surgical education and training, assessment and examinations, and in the provision of safe, high-quality surgical care.”

Speaking on his election as the College's Vice-President-Elect Mr Pala Rajesh said:

"I am delighted to have been elected to serve as Vice-President of the oldest surgical college in the world. It is a great honour and privilege bestowed on me by members of the Council of the College.

“I wish to perform my duties with PRIDE - Passion for the College, the teams, for the job that we do; Respect for our proud history and what we stand for as a College, how we treat our patients, our Fellows and Members; Innovation in that we are always prepared to challenge ourselves, be creative, learn from others, embrace change and evolve; Diversity in our people, our views, our attitude to patients, stakeholders and our nation, and Excellence in everything we do.”

Professor Parks and Mr Rajesh will join the College’s new President-Elect Professor Michael Griffin in taking up office at the College’s AGM on 9 November 2018. They will hold the position for three years.