A Professor of Gastrointestinal Surgery at the Royal Victoria Infirmary in Newcastle-upon-Tyne has been elected as the next President of the Royal College of Surgeons of Edinburgh. Professor Michael Griffin, whose revolutionary approach to tackling oesophago-gastric (stomach and gullet) cancer saw cure rates in surgical patients improve by over 50%, was awarded an OBE for his services to cancer treatment. At the College’s AGM on 9 November 2018, Professor Griffin will officially take over from Professor Michael Lavelle-Jones, a Consultant General Surgeon with an interest in colorectal and paediatric surgery. 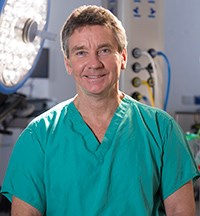 According to Professor Griffin:

“It is an enormous privilege to be elected as President of the Royal College of Surgeons of Edinburgh. It is a standout College, known for being approachable and welcoming. RCSEd is still leading the way in 2018 as it has done for the last 500 years.”

The President serves a three-year term of office during which they lead the College in its mission to promote the highest standards of patient care through training and education. Professor Griffin intends to retire from his clinical practice to focus on this role.

Professor Griffin has had a long-standing involvement with the RCSEd, having served on the College Council for 10 years. In 1990, he set up the Northern Oesophago-Gastric Cancer Unit at Newcastle General Hospital. After witnessing poor treatment and outcomes for patients with this cancer during his training, he spent a year at the Chinese University of Hong Kong studying oesophago-gastric cancer surgery and interventional endoscopy. He returned bringing his experience to the UK where he developed a surgical unit specialising in oesophagogastric cancer which is now the biggest in Europe and North America. Previously, only 2% of patients lived for more than five years post treatment, but this figure has dramatically risen to over 50% at the unit in Newcastle. Professor Griffin has championed the cause of specialisation and has been instrumental in the Improving Outcomes programme for oesophageal and stomach cancer by encouraging the centralisation of services in the UK.

“RCSEd puts patients and trainees first, and that's what I want to ensure continues. One of my priorities during my tenure will be continuing the College’s Let’s Remove It anti-bullying and undermining campaign, driven by a surgical trainee representative.

“This is an exciting yet worrying time for the Health Service, with huge financial pressures and difficult decisions need to be made. Fostering the next generation of trainees is crucial and our Trainees’ Committee has opened up a lot of areas we can develop, such as junior doctor hospital rotas and out-of-hours service.”

Outgoing President Professor Michael Lavelle-Jones has held office since 2015. Under his direction the College launched its #LetsRemoveIt campaign, which was shortlisted for a BMJ award and involved working closely with the Royal College of Obstetricians and Gynaecologists (RCOG), the British Medical Association (BMA), Royal College of Nursing (RCN), General Medical Council (GMC) and NHS Improvement to target the culture of bullying and harassment in the medical profession. He also oversaw a report on improving the surgical working environment, which was endorsed by policy makers in the Department of Health, NHS England and NHS Providers. In addition, he campaigned on issues including guaranteed time for training, the European working time regulations and access to surgical services in rural and remote areas.

“I inherited the College in great shape and throughout my tenure we have remained committed to excellence in surgical education, and have achieved great visibility throughout the UK on this and other key issues in training. Our 513 year old College is, as ever, extremely vigorous and full of enthusiasm for the future. I know Mike Griffin will do a great job and will continue to promote the high standards of the College throughout his term as President.”

During Professor Griffin’s tenure, the College will be hosting the International Conference on Surgical Education and Training (ICOSET) on 21-22 March, 2019. Professor Griffin said of the conference:

“Our groundbreaking Faculty of Surgical Trainers was created to champion excellence and innovation in training, and now has over 500 members. It is a huge tribute that we are to host the biggest international training conference, providing an ideal platform for sharing best practice and for our College to demonstrate how committed we are to patient safety and advances in surgery.”

The College opened a regional base of operations in Colmore Row, Birmingham, in 2014, in recognition for the 80% of the College’s UK membership being based in England and Wales. This was followed by the launch of our Malaysian office in 2018 to help promote our international activities.

Today, in its sixth century of existing, the College continues to promote the highest standards in education, assessment and surgical practice and is committed to providing the best services and facilities possible to everyone who chooses to join the College.