The Royal College of Surgeons of Edinburgh’s Lister Project has been recognised as the best permanent exhibition in the UK at the prestigious Museums + Heritage Awards for Excellence 2016.

The Lister Project involved a complete refurbishment of the College's Surgeons' Hall Museums with many more objects on display, fresh interpretation and modern AV and interactive elements to engage visitors. The Museums + Heritage awards attract entries from museums across the UK. The Lister Project faced stiff competition from the British Museum, the V & A and English Heritage. 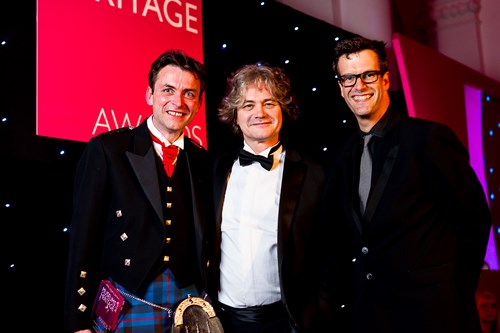 In addition, the Lister Project was also Highly Commended in the Innovation category for the digital dissection in the new Anatomy Theatre display of the refurbished museum.

President of the RCSEd Mr Michael Lavelle-Jones said: “The redeveloped museum has provided a fantastic platform to showcase our College's important role in the development of surgery over 500 years. We are absolutely delighted with the recognition that this award brings and hope that it will lead to greater understanding among the general public about the fascinating development of surgery over the centuries.”

The winners and runners-up in each of the hard-fought categories were announced by comedian and TV personality Marcus Brigstocke on 18 May at the Historic State Rooms of 8 Northumberland Avenue in central London.

RCSEd’s Director of Heritage Chris Henry said: “After three years of intense effort, these awards are recognition of the efforts of all the staff who worked on the project. They propel Surgeons' Hall into the top rank of museums in the UK and I'd like to thank everyone who was involved in making our museum such a success.”

On awarding the accolade, Marcus Brigstocke described the Lister Project as: “A transformative project which achieved an impressive balance between its architecture and collection.”

Regarded as the Oscars of the museums and heritage industry, the Awards ceremony is attended by hundreds of sector professionals who join to celebrate the incredible achievements and groundbreaking projects of the past 12 months.

For further information about our Surgeons' Hall Museums visit museum.rcsed.ac.uk.