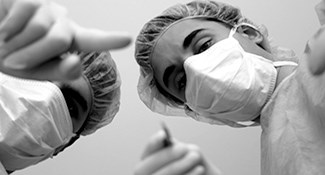 Three out of five surgical trainees have been victims of bullying and undermining at work, and nine out of ten have observed first-hand these behaviours taking place, a proportion three times higher than recorded across other healthcare professions. The new survey findings were unveiled during a recent week-long series of innovative events on the theme of patient safety held by the RCSEd.

At the official launch of a new base in Birmingham, which opened last month to cater for the 80% of its UK membership based in England and Wales, the College played host to over 250 guests including consultants, trainees and prominent figures in healthcare from across Britain to engage in discussions regarding some of the most important issues facing the surgical profession.

Events which included career development workshops and presentations on operating theatre checklists centred on key themes such as patient safety, professionalism and leadership excellence.  In addition, an entire day was dedicated to exploring challenges and opportunities faced by trainee surgeons, including workplace bullying – an issue which has been estimated to cost the NHS £13.75billion annually. Despite 60% of trainees polled having personally been at the receiving end of this type of aggression and nearly all (94%) observing it, just over a third (35%) felt able to report it through the appropriate channels.

Surgeon-in-training Mr Richard McGregor is Chair of the Trainees’ Committee, which - unlike any other College - enjoys representation on the RCSEd’s own Council, to keep them informed of the issues faced by surgical trainees. He says;

“According to a recent publication in the BMJ, one in five (20%) NHS staff have been the victim of bullying and just over two in five (44%) have witnessed it. These figures are dwarfed by the experience of surgical trainees, three in five having been targets and nine in ten observing this damaging behaviour up close in the workplace. These figures continue to back a recent GMC survey highlighted surgery as one of the worst specialties for bullying and undermining.

“There needs to be tougher lines for those guilty of this type of unacceptable harassment and trainees must be made to feel that they can raise concerns safely, rather than just putting up with the abuse because of fear of repercussion. Robert Francis QC  stated in his report that trainees are the ‘eyes and ears’ of the health service and a toxic culture of institutional undermining can ultimately impact patient safety.”

More than four out of five (81%) of those surveyed at the sold-out ‘Trainees Day’ event felt the College, the only one in Britain to offer a dedicated Faculty of Surgical Trainers, has a unique role to play in helping tackle the problems. After holding an in-depth round table discussion on the subject, the RCSEd is now launching groundbreaking new ‘Professional Excellence Groups’, to help form unique peer-to-peer team relationships that will provide a safe environment in which to constructively share concerns.

According to consultant transplant surgeon Lorna Marson, convener of the RCSEd’s ‘Professional Excellence’ peer mentoring groups, which are launching this September;

“Undermining and, to a lesser extent, bullying, has been a part of surgical culture for a long time, and it is likely that this may in part be due to the hierarchy of the environment. There is little doubt that we learn our behavioural patterns from senior colleagues, and if the senior surgeons are exhibiting destructive behaviours, the cycle will continue.

“For a while, I've been exploring a way of mentoring as a means of supporting surgeons in training, and consultants. One of the concerns regarding senior surgeons mentoring trainees is that this may perpetuate the hierarchical culture. I came across a group of people, outside of the surgical arena, who run peer to peer mentoring and support schemes, and was so struck by how powerful it was that it became a model for the Professional Excellence Groups. These represent a safe network in which individuals can share ideas and challenges, and assistance to help individuals deal with situations.”

Another initiative includes a new working group, set up to be co-chaired by Richard McGregor and the College’s Vice-President Mike Lavelle-Jones, who recently won the highly prized accolade of ‘Surgical Trainer of the Year’ as chosen by trainees themselves.  The ‘Short Life Working Group’ will help develop written guidelines and practical tactics to support trainees who are victims of harassment.

According to the Mike Lavelle-Jones, who was lauded as ‘inspirational’ by Director of England’s NHS Bruce Keogh when awarded the prestigious ‘Silver Scalpel’ by the Association of Surgeons in Training (ASiT):

“It is important to keep in mind that not everyone is a born trainer – occasionally, inexcusable situations of aggression or harassment can emerge if people are tasked with a responsibility they simply do not have the tools to cope with. It may seem surprising but in over 500 years there has never been a system of ‘accrediting’ surgical teaching, which is why our College’s Faculty of Surgical Trainers is so groundbreaking – and it is open to all affiliations.

“Matters surrounding bullying and harassment in the workplace may be complex, but such activities have no place in the NHS environment, and I’m pleased to assist in undertaking a detailed analysis of these issues and develop strategies to tackle them head on.”

According to consultant trauma and orthopaedic surgeon Ian Ritchie, President of the Royal College of Surgeons of Edinburgh:

“Bullying and harassment is clearly still a significant issue for trainees and one which the College is determined to address. For those who are subject to such behaviour it can have a significant and lasting impact, but those who witness it within their team can also be affected deeply. As a consequence trust, the cornerstone of any team, cannot be established, and a climate of fear and mistrust can develop which clearly has an effect on patient safety.

“Clinicians historically tend to have a parent/child approach with trainees, when, in fact, it would probably be healthier if they were regarded as equal adults, albeit with less clinical experience. Perhaps that would promote the concept of rational discussion between adults rather than situations that could be viewed as bullying. Most importantly, trainees must not feel that they will be fingered by speaking out; they should respond honestly to any surveys because it'll get back through the system for remediation to take place.”