RCSEd President Calls for Rethink on Workload of Junior Doctors 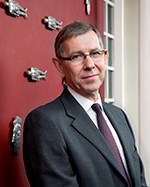 RCSEd President Mr Ian Ritchie, in his new role as Chairman of the Academy of Medical Royal Colleges and Faculties in Scotland, has today called for a rethink of the workload placed on junior doctors following the death of a young medic driving home from a hospital night shift.

In an interview in today's The Herald, Mr Ritchie has called on his consultant colleagues to look at their own ways of working to ensure the welfare and enthusiasm of medical graduates is protected. His comments follow the death of Dr Lauren Connelly, who was killed driving home from Inverclyde Royal Hospital in Greenock seven weeks into her first job. Her father Brian later spoke out about the hours his daughter had been working in the run-up to her accident and called for an overhaul of junior doctor working arrangements.

In his first interview since taking up the post of chairman of the Scottish ­Academy, Mr Ritchie said:

"I feel very strongly for the plight that Mr Connelly finds himself in, because I have a daughter who is a junior doctor.

"If we are working in a service where a junior doctor drives home and at least in part because of the job ends up having an accident which results in her death, as a clinician I want to be examining what it is about the way we run the service that needs to change.

"There is clearly something wrong with the way the service is ­delivered, and therefore we have a responsibility to look at the way we work to ensure we make things better for doctors in training."

In the interview, Mr Ritchie said the government had gone a long way with introducing working hours restrictions, but added: "It is clear that while there is a law about working hours and the letter of the law is being adhered to, the spirit of the law isn't being followed. Junior doctors are still working long hours.

"The consequence of that is that at one extreme it may have contributed to the loss of a junior doctor's life. At the other extreme, junior doctors are ­questioning their career decisions and in the Scottish context are leaving ­Scottish medicine."

To read the full article please visit The Herald website.